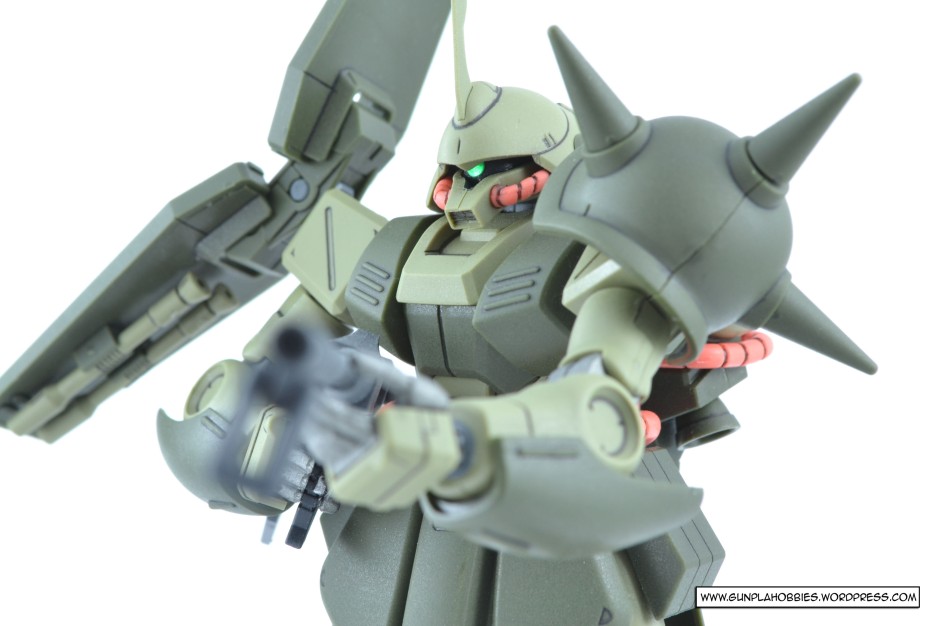 Hello guys! At last l have mustered up enough energy to do another Gunpla review! It’s been a while since I did a Gunpla review, but I have been practicing my photography skills at other things, hopefully I will be able to produce better photos today than my previews reviews.

I will also implement a new “Gunpla review template and scoring system” and will apply it to this review! The new template would be that I will review and give a score to each part of a Gunpla, namely the head unit, left arm, right arm, body unit, waist unit, left leg, right leg and the weapons. For the scoring, I will be using Fibonacci numbers from 1 to 21 to score each part, so the possible scores would be: 1, 2, 3, 5, 8, 13 and 21 being the highest score possible. It’s a good idea to give a description to each score I think:

5 – Part is below average expectation or quality.

I used Fibonacci numbers because it’s easier to differentiate between score of 8, 13 and 21 since they are far away from each other. Rather scoring 1-10 since they are just consecutive whole numbers in which sometimes it’s hard to decide whether it’s a 7 or 8, right?

After doing that, I will also give some technical and financial aspects of the kit! For the technical I will just be giving all possible technical data of the mobile suit, while for the financial aspect, I will give the price for which I bought the kit, where I bought it and the company who made it. Sounds good? Okay! Let’s start!

So today’s mobile suit is RMS-108 Marasai [Unicorn Ver.] Neo Zeon Attack Use Mobile Suit! I will show first the box, runners and some pages of the manual. 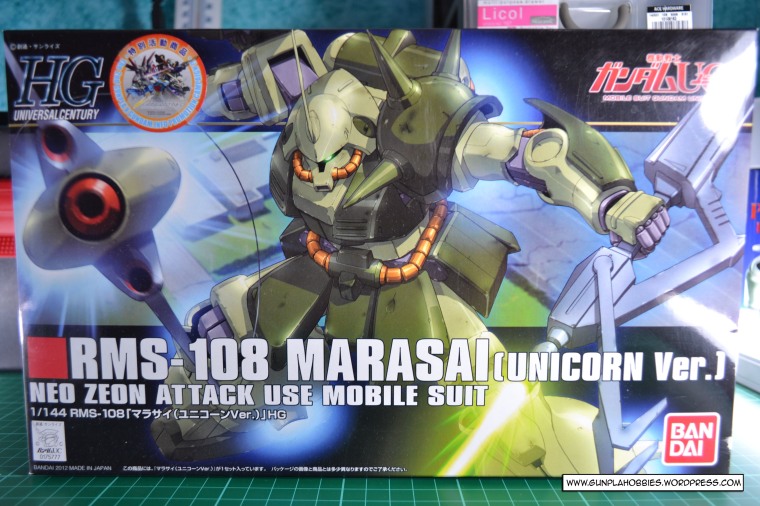 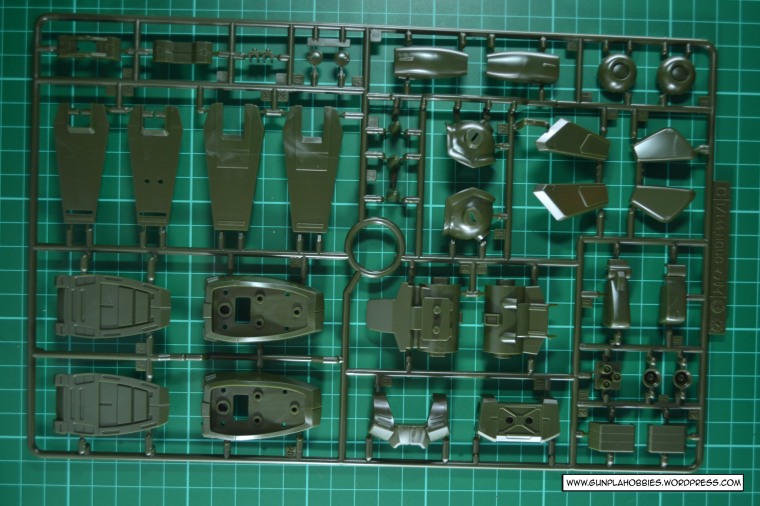 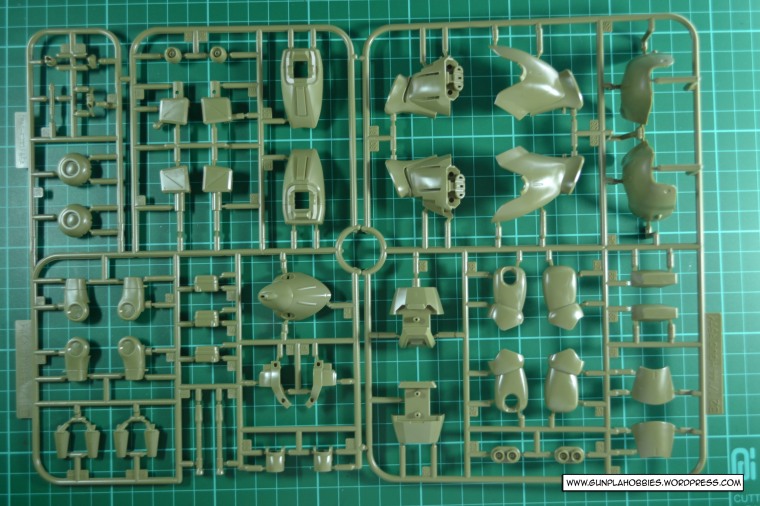 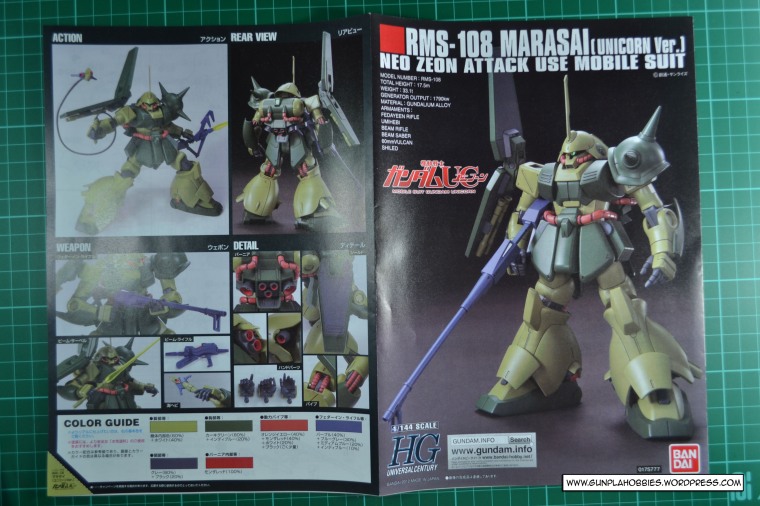 Front and back page of the manual, the standard look for HGUC kits.

More illustrations inside of poses and gimmicks. 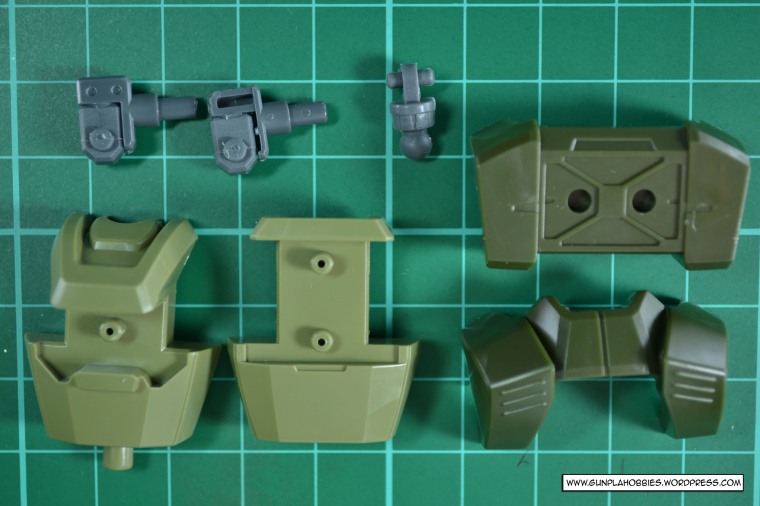 Back pack parts, 9 parts in all. 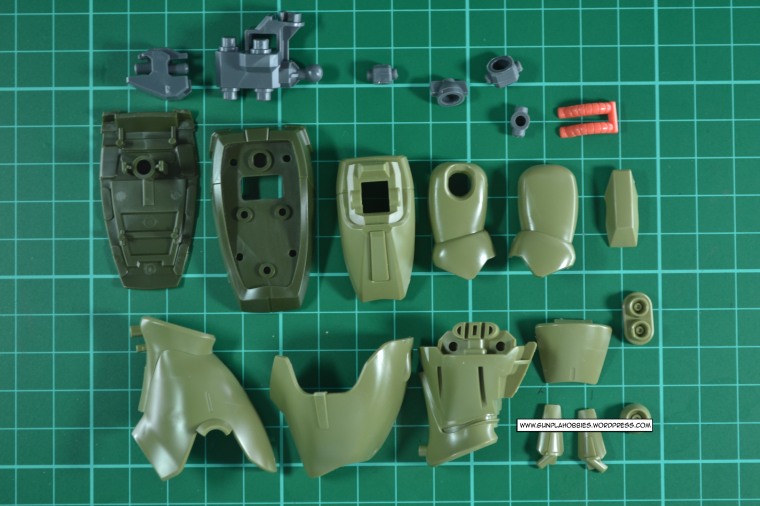 Weapons, 13 parts in all although I forgot to include the smaller rifle.

Sorry I also forgot to take a photograph of the right arm parts.

The front mouth piece was a little misaligned, now I’m not sure if it’s my fault or the molding is a bit off. Easy to build and panel line. 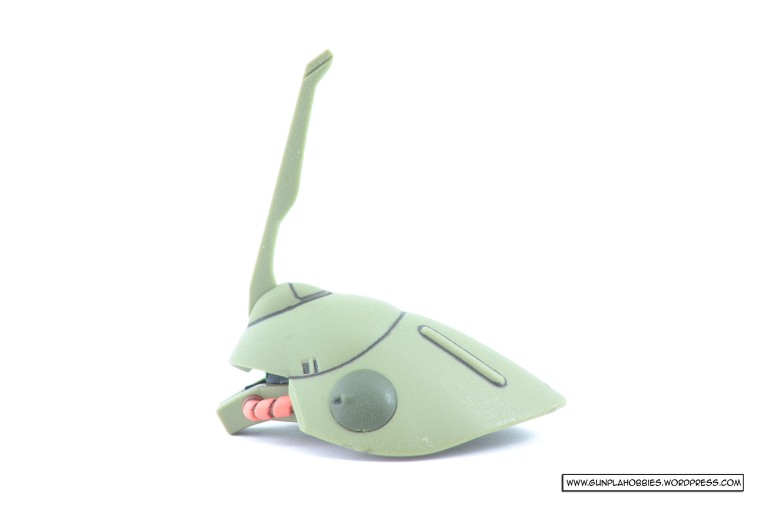 I give it a score of 13! It’s pretty great, a different head design for mono-eyed mobile suits. It kinda looks like he is wearing a military helmet.

The shoulder joints enable the arms to move forward a bit for more flexibility. 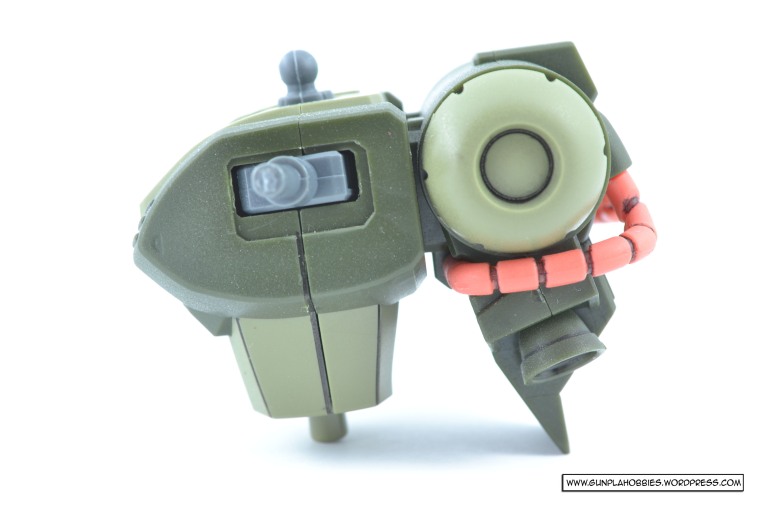 The bright orangey pinkish color of the power conduits really give a nice contrast to the main color of the body.

Just has a standard neck joint with no possible articulation.

I give this part a score of 21! It’s a perfect body unit for a cheap HG kit!

The spikes for his shoulder armor are quite longer and larger compared to my previous zaku-like mobile suits. I painted the gray parts dark metallic gray.

It has a standard HG right angle articulation, no complains there. 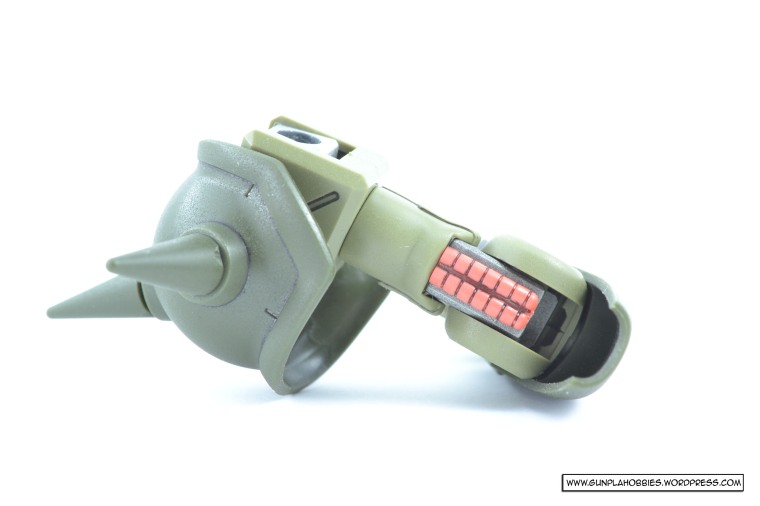 it’s nice they put some bright salmon-like colored power conduits too for the back of the elbow! Again it adds contrast!

I give it a score of 21! Perfect right arm for this HG kit! 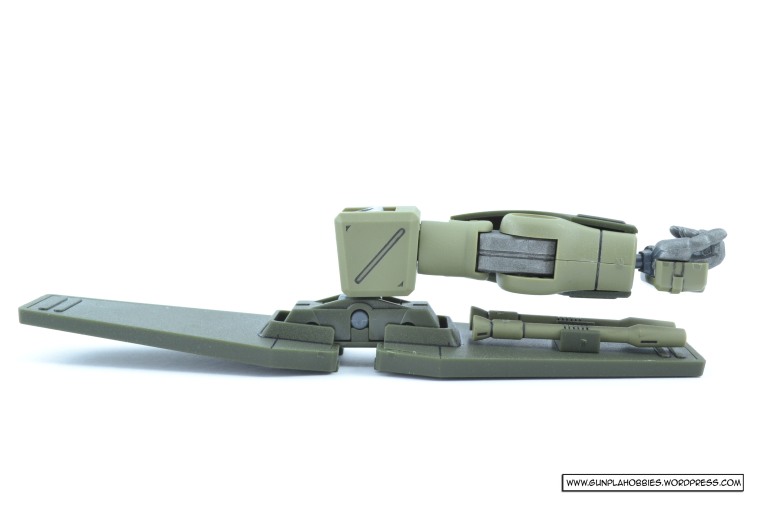 For the left arm, instead of a spiked shoulder armor, they put in two large bits of shield! The beam saber hilts are also stored/attached there. Same arm articulation with the right arm of course. 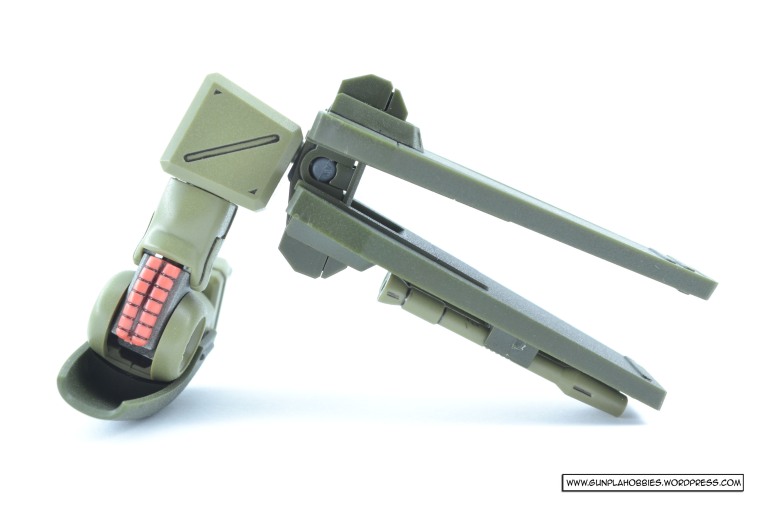 At first, I though they looked like some kind of satellite or something, It would have been much cooler if it can shoot out beams too!! But anyway it’s just a larger shield. 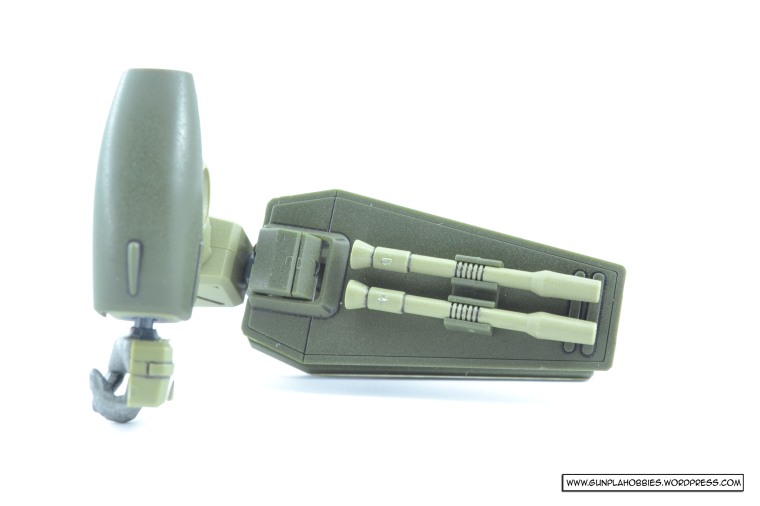 I give it a score of 21 too! It’s nice that they made one shoulder different from the other, and the beam saber hilts are attached there, its quite logical since it would be easier to reach for them while in battle 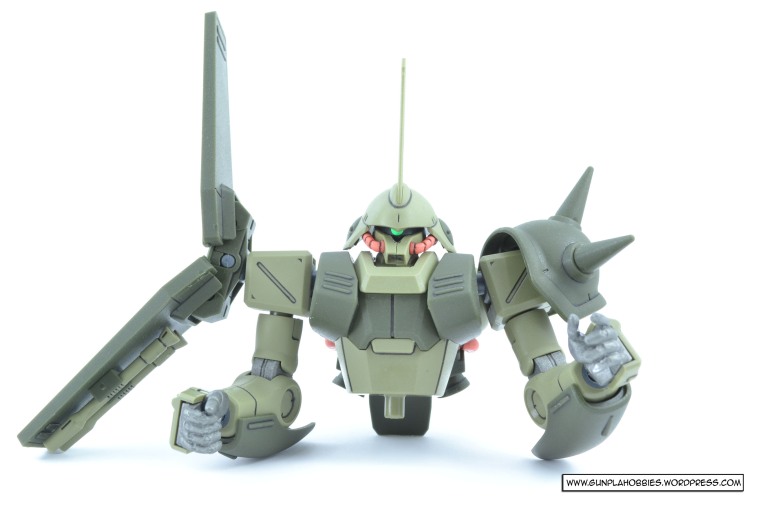 The waist unit is nicely done! It’s been a while since I’ve experienced the popping off front skirts disease, but it seems like that kind of design is already gone for recent HG kits.

The back skirts are longer. again with the orange power conduits, I really love how it contrasts with the dark green, they compliment each other! 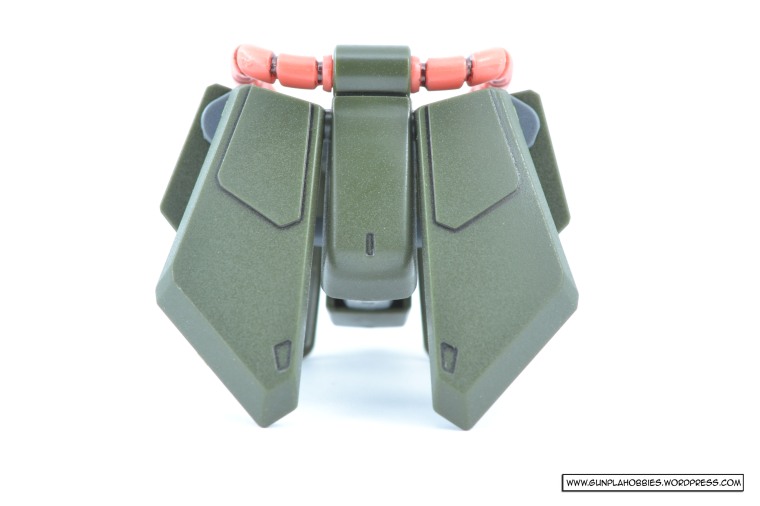 I give it a score of 21! Perfect waist unit for an HG kit!

Standard HG leg articulation. Thrusters are present at the sides of the legs, it is a nice addition. 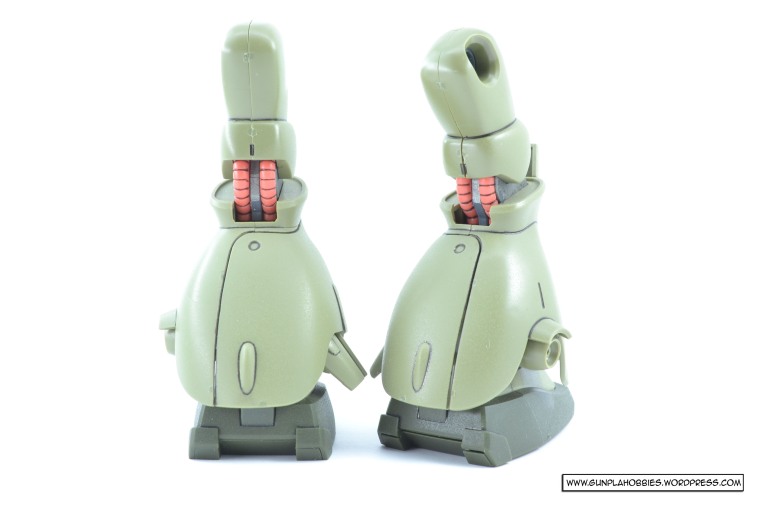 There is one problem and it is the articulation of the feet, it has less articulation compared to my other zaku-like mobile suits, it just can’t flex to the left for the left leg and right for the right leg, although there are power conduits again at the back of the knees! I give both legs a score of 13.

He has a nice set of weapons namely the Fedayeen Riflle, two beam sabers, Umihebi and a standard beam rifle.

The Fedayeen Rifle is cool since it packs a punch and it is convertible to a beam saber too! He also has Umihebi which is like a grappling or shocking hook! Much like what the Gouf has too. 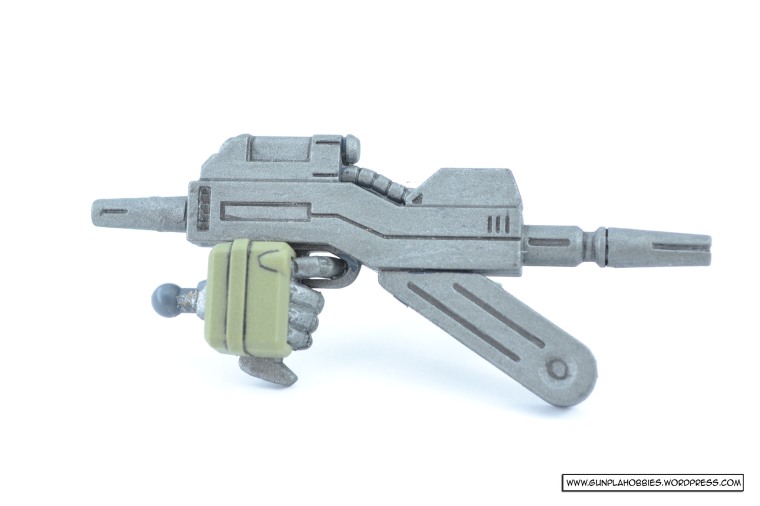 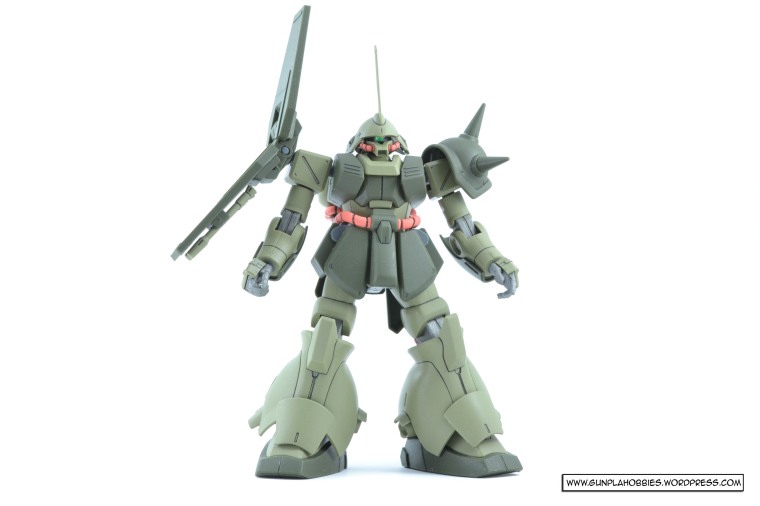 Time for some poses!: 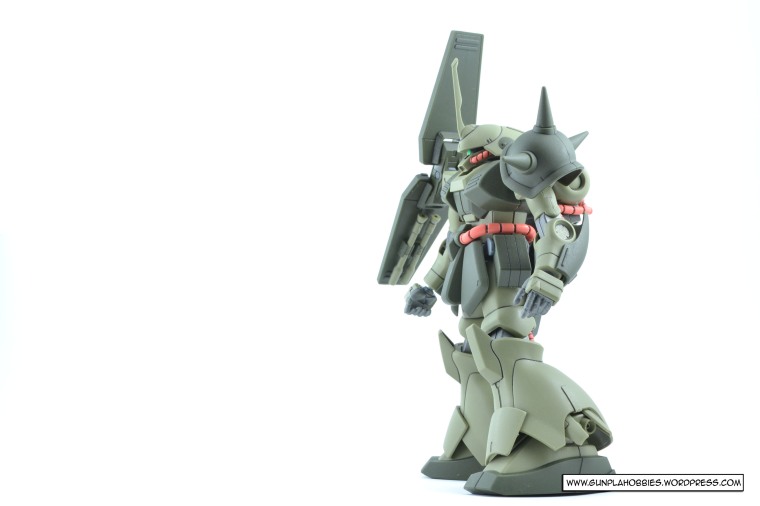 Having a tripod, setting a low ISO setting, having a really small aperture and slow shutter speed really makes the object look sharp! But the tripod has to be really stable and you have to press the capture button softly and firmly, not like a quick jab or better use the timer function of your camera to avoid human input noise to the device. 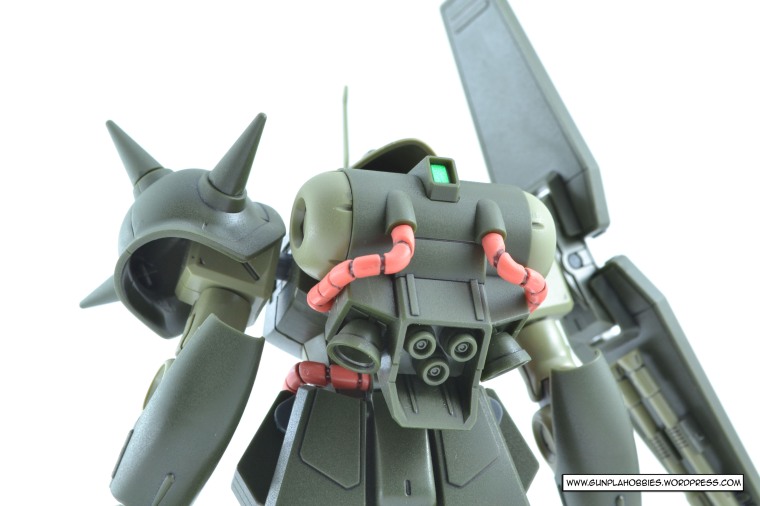 I love how the photos turned out for this photoshoot. =3 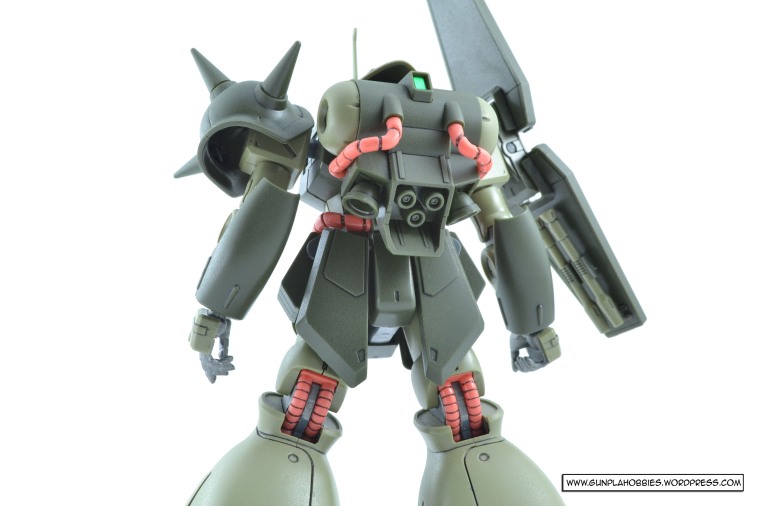 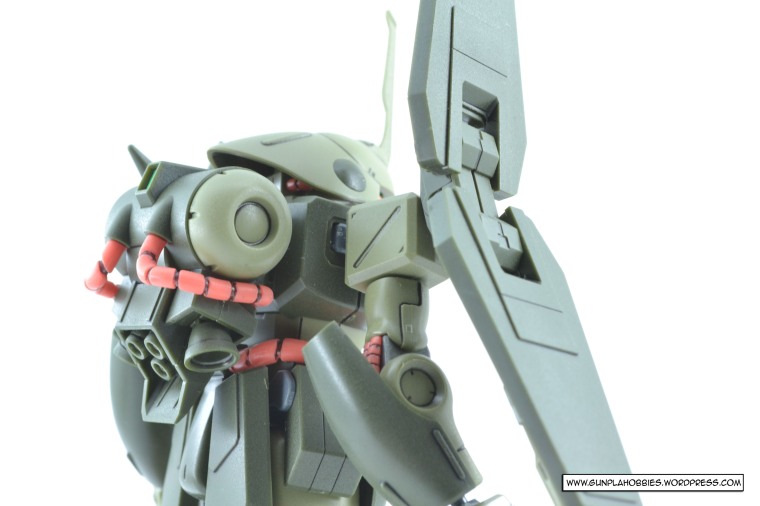 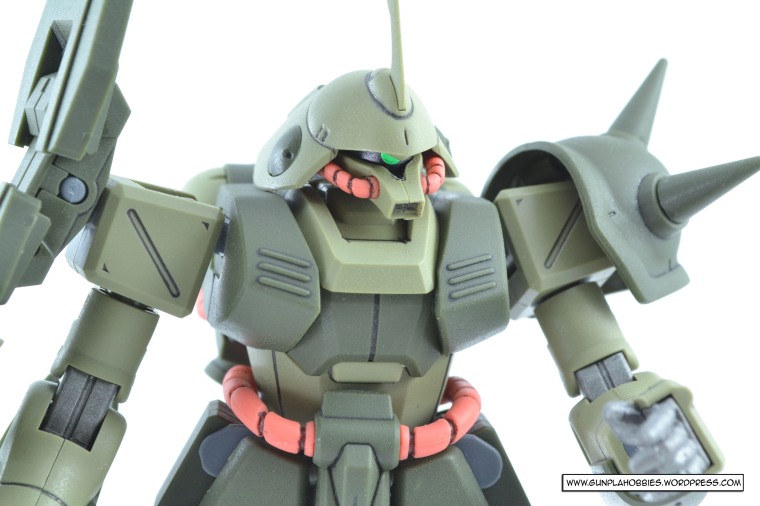 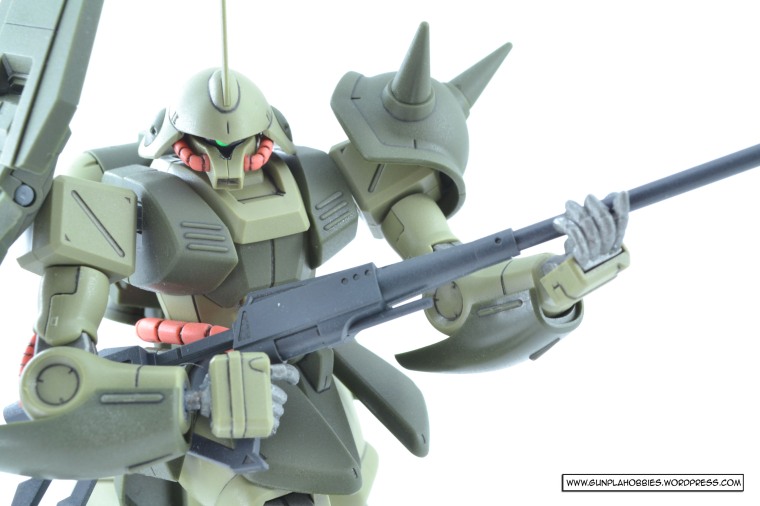 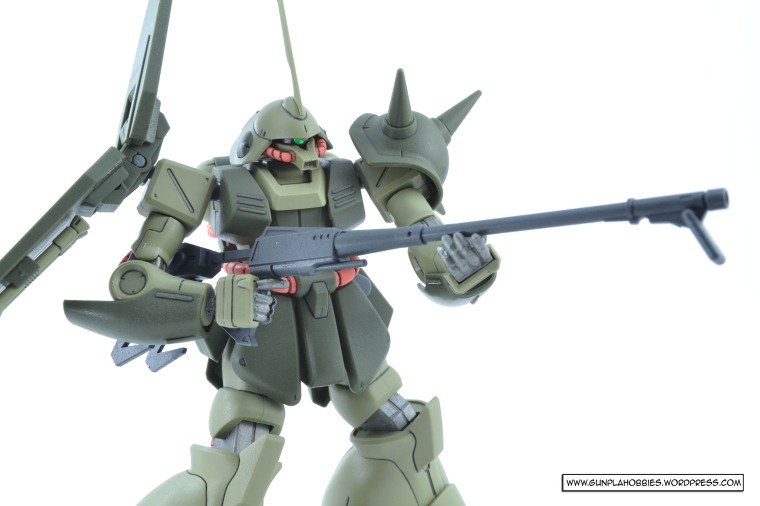 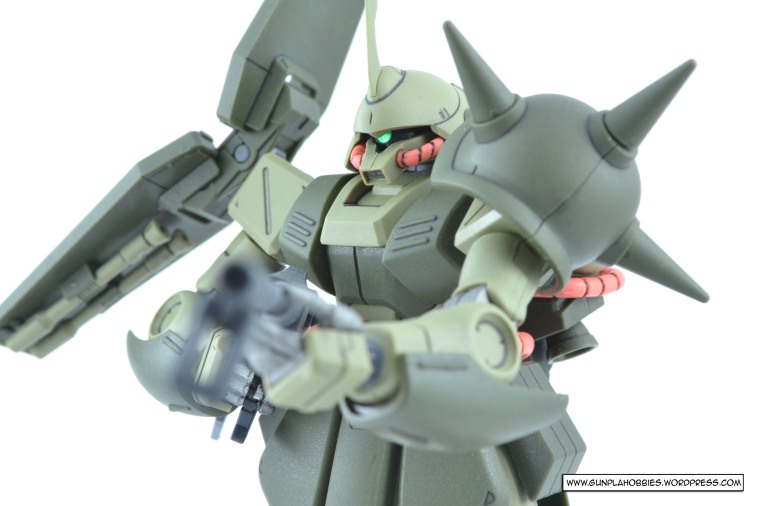 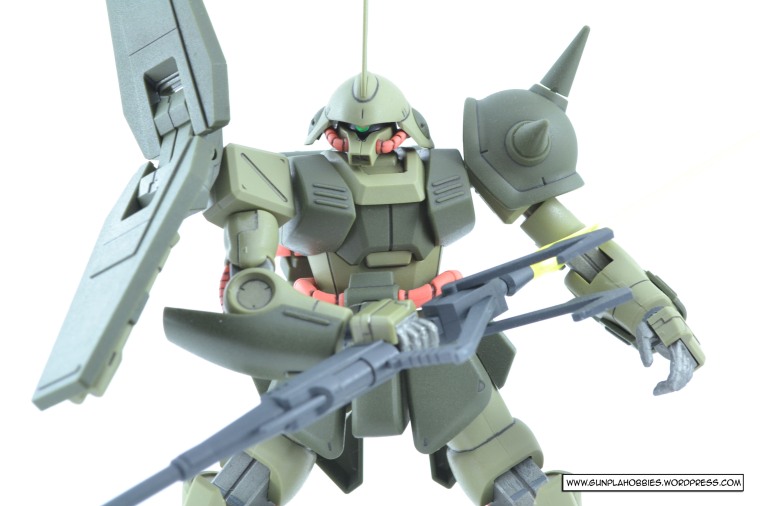 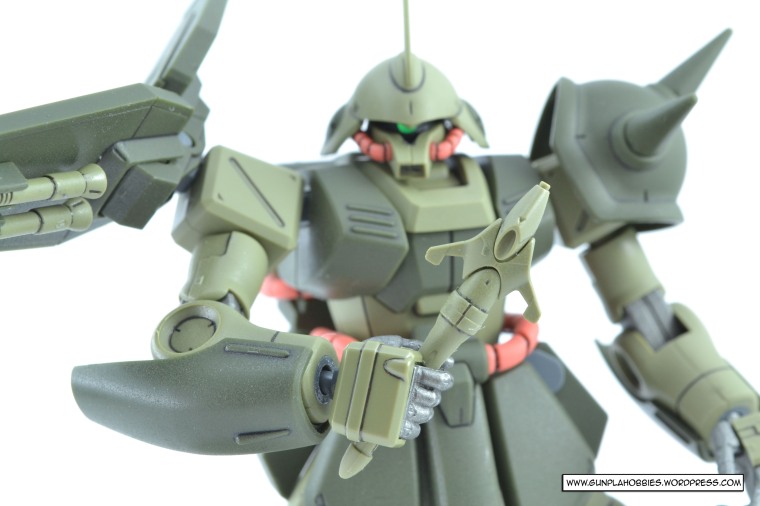 He really looks great! I definitely recommend him for guys who are fond of mono-eyed mobile suits! I’m pretty satisfied with this kit!

Extra notes: I painted the gray parts dark metallic gray XF-56, top coated it with Bosny No. 191 Flat clear, it is cheaper (around 90~149php depending on where you are buying) than Mr Hobby TopCoat and comes in a larger can too! Although the grains are bigger resulting to a more chalkier finish, but I like it anyway! =3

Well that concludes this review! Hope everyone enjoyed! Till the next review!