Hello guys! Its time for another Gunpla review! It’s been a while since I reviewed a Gunpla, this guy really took me a long time because I wanted to try out painting all the parts that I could paint and try some simple weathering. =3

Though I forgot to take photos of each separate part like I use to but.. oh well, but I did took a lot of photos of him so let’s start! Oh and I tried changing my backdrop to a dark blue, hope it turns out alright. =3 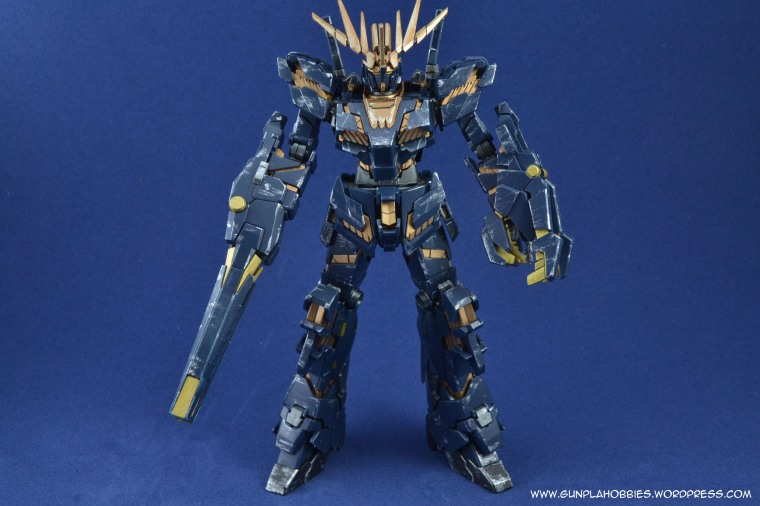 For an HG kit, this has a lot of parts! Same with the HG Unicorn Destory Mode that I assembled earlier. It was easier to assemble the parts of Banshee since his parts are almost the same with the original Unicorn.

I didn’t have any troubles in assembling this kit, though the beam saber hilts attached to his backpack are still easy to break. So be careful if you’re going to get this kit, I’ve broke the hilt of my original Unicorn as well as Banshee’s one beam saber hilt haha! XD

This is the first Gunpla that I’ve used two types of paint, lacquer and acrylic and different colors too, mostly metallic colors that are glossy when they dry up.

I really enjoyed painting this kit since they are a lot of potential parts to be painted, especially the this Banshee is in destroy mode, you have to paint the dull yellow orange parts to your desired gold of choice.

I really love how the paint turned out, whilst reading some other tutorials and painting stuff, I sure learned a lot from others especially when you’re already trying it out on your own.

As you can see, I did some weathering on him, but only a very simple weathering method. I might make a tutorial on this and use the next gunpla kit for it. =3 Well, the weathering only simulates chipped paint or scratches on the armor that reveals the metal under it.

Okay what paints did I use? For the inner gold parts for the destroy mode effect I used Mr. Metal Color # 217 Gold.

This paint is lacquer based and it dries up pretty quickly that makes hand painting harder, so I mixed some thinner and some paint retarder for easier hand brush painting the parts using this paint.

For his backpack and feet I used Mr. Color # 78 Metallic Black.

This one is also lacquer based so again I used some thinner and retarder. =3

For the gold parts of the left and right arm, I used Tamiya Color Acrylic Paint X-12 Gold Leaf.

Acrylic paints are best for hand brush painting since it does not dry up quickly like the lacquer based paint, but I still prefer mixing some acrylic paint thinner before applying the paint onto the parts so that the paint will even out and will not have presence of brush strokes.

For the joints and other gray parts I painted them using Tamiya Color Acrylic Paint X-10 Gun Metal.

Oh this is one of my favorite acrylic paints!! It has the perfect metallic sheen when it dries! And love the dark greyish color it produces. Perfect for inner frames or weapons.

I also love this paint because it has the perfect silver tone and luster that simulates a platinum like sheen or a scratched metal surface. 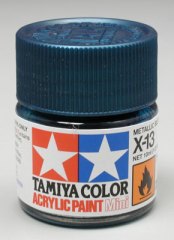 It seemed weird painting the inner thruster with this color, but it turned out pretty good actually, I’ve seen a lot of gunpla customizations that use this color as the color of the inner part of the thrusters, if not its usually red or yellow. 🙂

I’ll go more into the painting details when I make another tutorial about it.. so its.. simple weathering and some simple hand painting tutorial that I need to do haha! XD

Of course it’s not all me, I’ve learnt from others of course, I will just share what I have experienced in doing so =3

Wait! Back to the Banshee! So yeah a lot of painting was done, here are some poses! 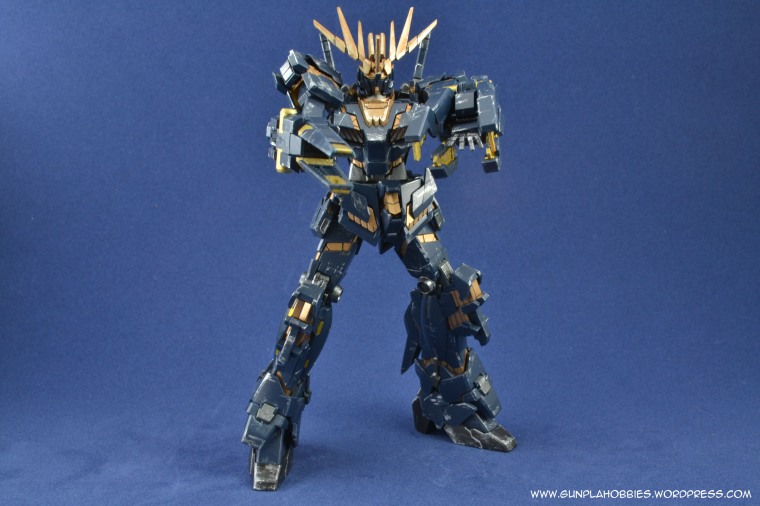 Figma stands turns out to be quite useful haha! =3 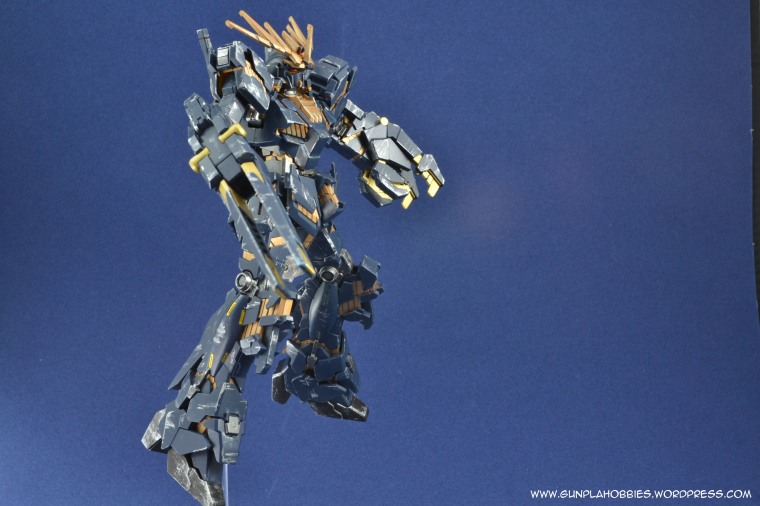 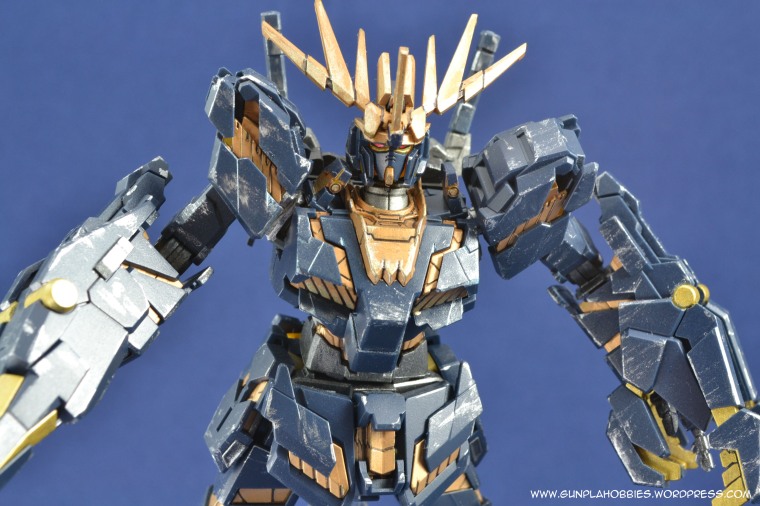 Oh yeah! I used gloss topcoat instead of the usual matte. =3

I did some closeup shots, you can view it on the gallery below! For now let me show you his articulations. 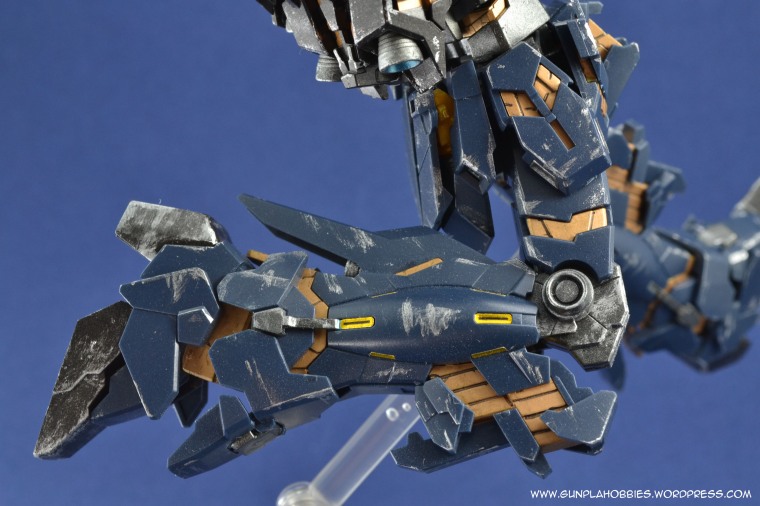 He has a standard HG leg articulation, nothing special but its enough bending for an HG kit.

Nope he cannot split like some HG kits do now, if you force it, his legs are going to come off. XD

His shoulder joints are nice! As you can see, his arms are basically supported by two joints actually, that enables him to bend his arms better and make ‘hands up’ articulations. 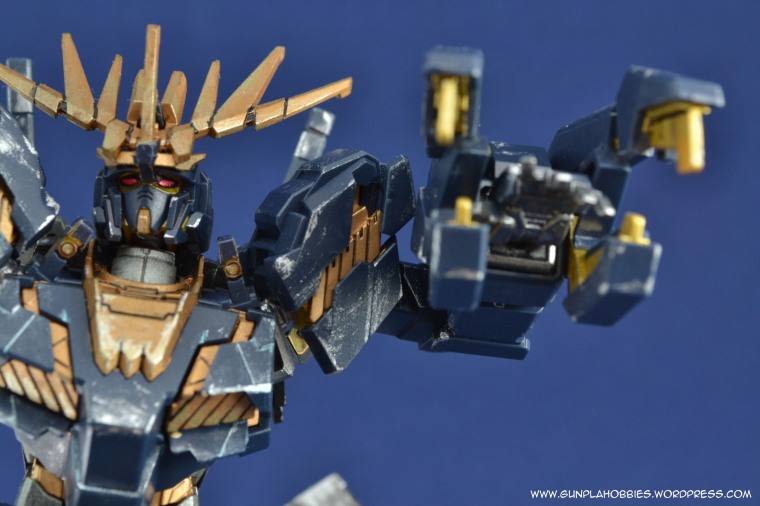 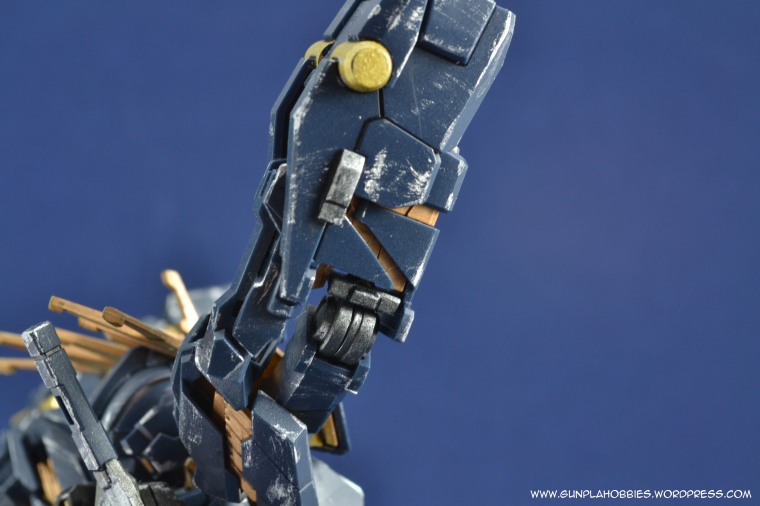 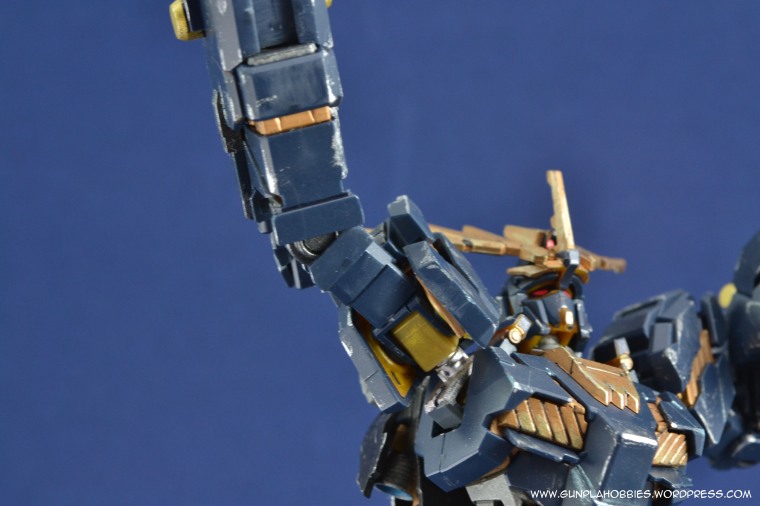 As for his waist, he can practically turn a full 360 degrees XD  I’ve only shown 90 degrees because it would be much weirder to pose him with his waist turned around to his back side.. XD He already looks awkward posing at 90 degrees. XD 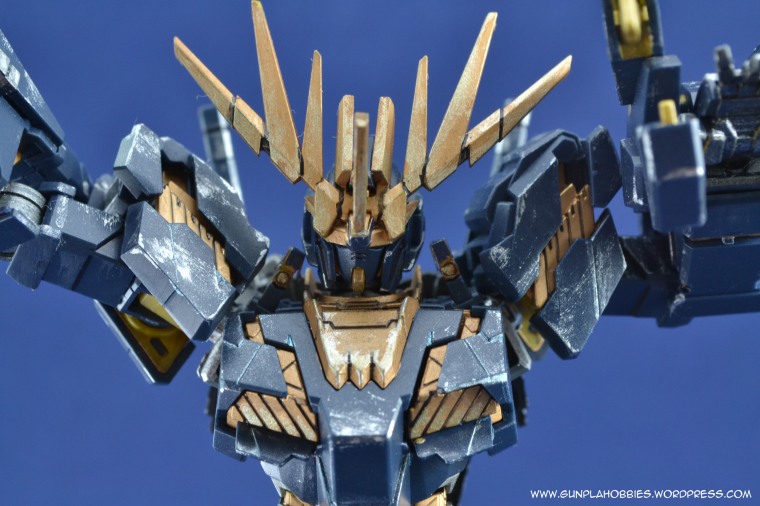 His head has a nice up and down articulation with the help of his neck joints that is also somewhat double jointed or whatever you might call it. XD 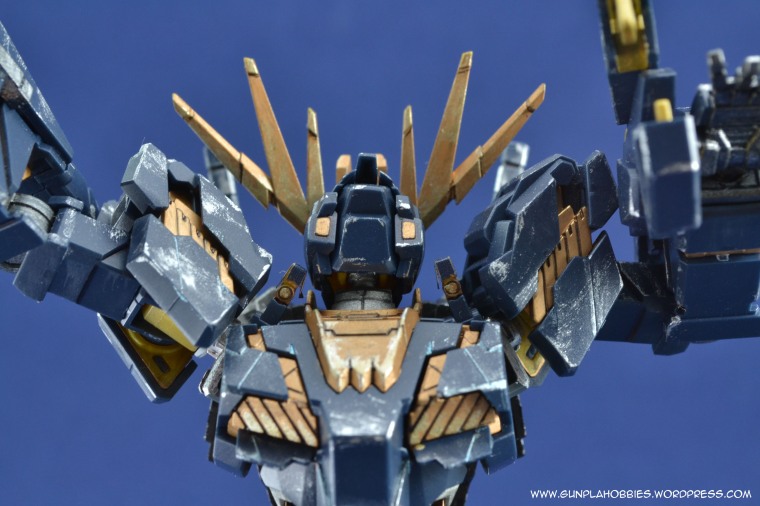 His head can also turn a full 360 degrees without any obstructions. 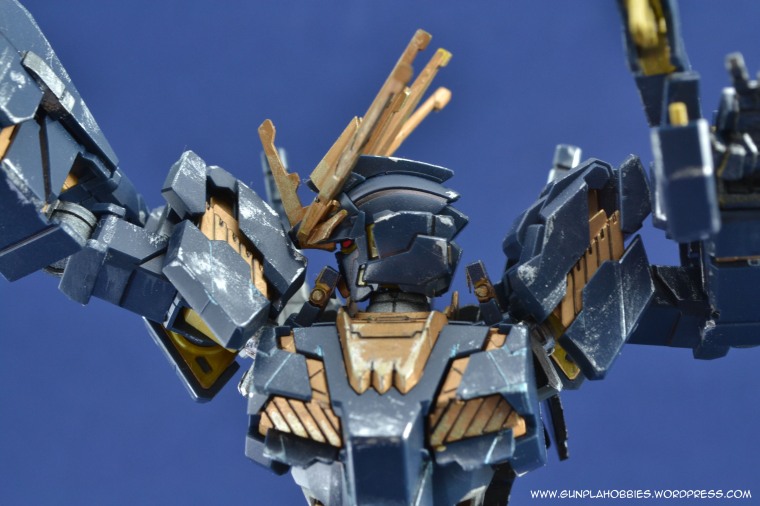 So let’s discuss what I like and don’t like about this kit, I decided not to do any scoring system anymore because its really hard to put numbers to it, unless readers are familiar with your scoring system or standard. Well anyway its easier to analyze part by part and discuss with words what I think about this kit, its also easier for readers to understand I guess? rather than putting up a bunch of numbers. I’m too lazy to put up a nice scoring system like what Dalong does, but anyway:

1. Hell, being a Unicorn kit, especially being a variant MS of the original Unicorn MS(that I really like).

3. I really like his uhh.. is that still considered a V-fin? XD I think of it as a lion’s crown or his hair maybe? It really adds to Banshee’s elegance and fierce quality.

4. He has no detachable main weapons, except for the beam sabers, but he has two awesome weapons that is attached to both his arms! For his left arm: “A weapon featured only on the OVA version, it is fixed on the left arm. The Armed Armor VN is a Psycoframe-embedded destructive vise-like weapon that utilized super-vibration to effectively destroy mobile suits. In Destroy mode the weapon transforms into a shape similar to a beast’s claw. It is treated with beam-resistant coating and can also be used as a shield or striking weapon when in Unicorn mode.” How cool is that?

5. And.. for his right arm: The armed armor BS: “A weapon featured only in the OVA version, it is equipped on the right arm. A Psycoframe-embedded long-range beam smart gun, it is capable of extremely accurate firing, achieved by a special built-in sensor unit transmitting spatial data to the pilot via Psycommu system and using the pilot’s reaction to synchronize the beam-directing “fins”. The weapon can be used in both Unicorn and Destroy modes”, another awesome weapon!

6. You can actually build his normal shield and beam magnum because it comes with the kit but has no instructions, but you can follow the instructions on the original unicorn anyways because its the same.

7. Great number of parts for an HG kit! Not difficult to build.

1. Same with my HG Unicorn, the kit does not come with the beam sabers, just the hilts. Would have been cooler to have him wield dual, even 4 beam sabers!

2. Hilts on his backpack are real easy to break so be careful, I broke mine a lot of times.

3. Maybe.. his claw like weapon does not have any articulation or movement, its static. It cannot hold grip of another HG gunpla’s head.

Well that’s about all I can say for this kit, if you’re a unicorn fan! He’s a great haul! But if you have built a Unicorn MS before, you might get lazy to build him since the parts are almost the same, well that’s what happened to me, but nevertheless he’s an awesome MS!

Checkout the gallery for some close up shots I did! Thank you for visiting and till next time! =3