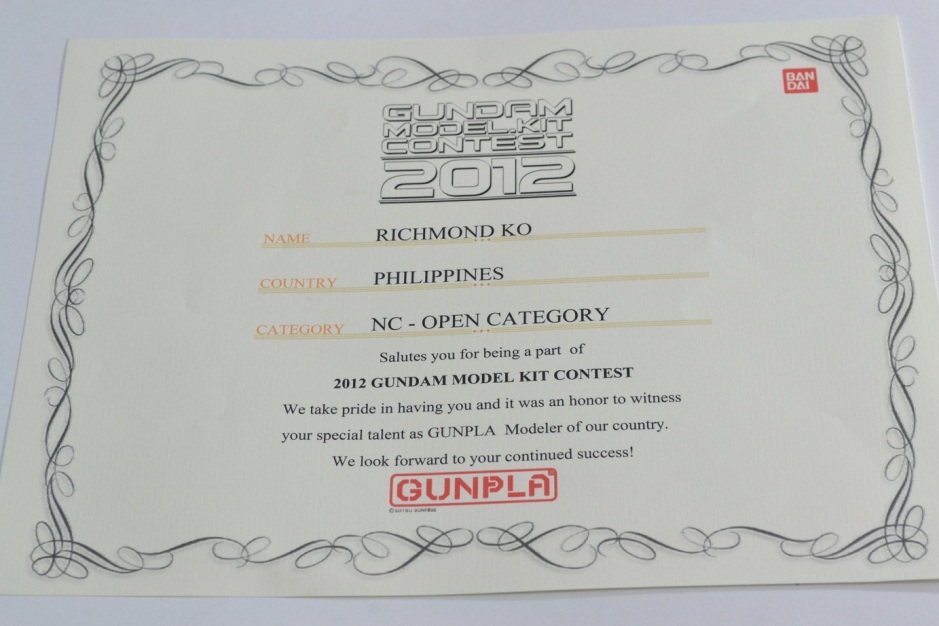 As you might have guessed, yes I DID NOT  win!

I didn’t even place in the top ten! There were so many pros!! Still need to do some catching up with various skills and techniques for gunpla custom painting and such.  Above is a photo of my certificate on joining the event, its a nicely made certificate don’t you think?

So yeah well, I did not place even for the consolation prizes, I was a bit down at first, but then as I was going to claim my entry and go home… my name got called out by the host!! And as I went to the stage and was wondering what it was..

I just won a raffle!!

Apparently, everyone who joins the event, gets an automatic raffle entry for every entry they submitted. (maximum of 3 entries were allowed, and I only submitted one). And guess what I’ve won! It’s even better than the consolation prices of the 4th to 8th place. (consolation was an HG seed remastered kit as I peeked at some of the prizes contents, and also upon asking some of the consolation prizes winners.).

I was really happy to receive this along with other Gunpla merchandise that I will show later on. It is better than the consolation prize: HG Seed remastered kit right? =3 Especially that it’s been a very long time since I’ve built an MG.

The prize was given to me by a Bandai Hobby representative from Japan! And then they took a photo of me along with receiving the prize. I was really surprised to have won this especially that I never expected this to happen. Thanks to my luck! =3

This one is a Gundam Unicorn folder, I remember seeing this at Gundam Guy. I put my certificate there so that it won’t wrinkle as I went home. =3

I also got this! How to make kits [Master Grade] presented by Masked BAKUC! Its only a 14 minute video and it was very informative. They showed how to panel line, weathering using Gundam weather markers, some drilling techniques and sandpaper, sealing seam lines and the like. 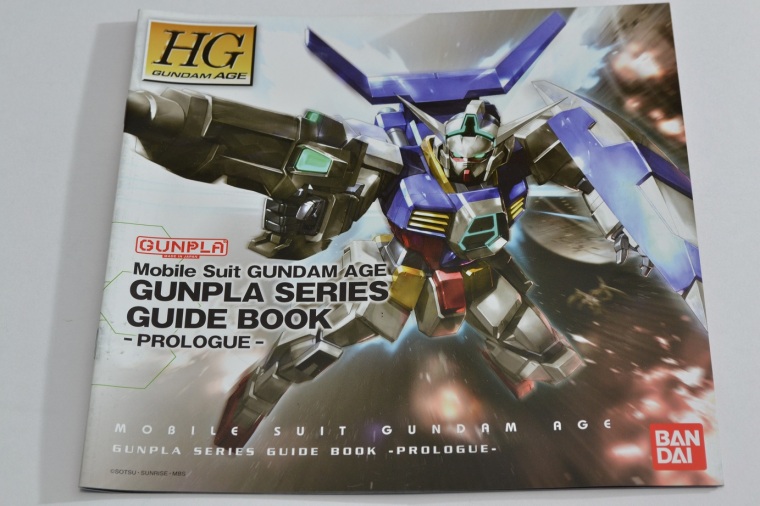 Lastly I got this kind of catalogue featuring the Gundam Age series!

Here is a sample page of the catalogue:

Its just features the different Gunpla kits that are available from the Gundam Age series. 🙂

I’m very much excited to build my MG RX-75 Guntank, I will be trying to custom paint it and apply weathering all over, but it looks like it will take a lot of time as I still have two pending Gunpla kits to build! XD

For the next post, I will be showing photos of the entries and some Gunpla display during that event. =3 Tune in! =3